https://www.youtube.com/watch?v=l3P3cTQL_qA
No comments have been found at this time 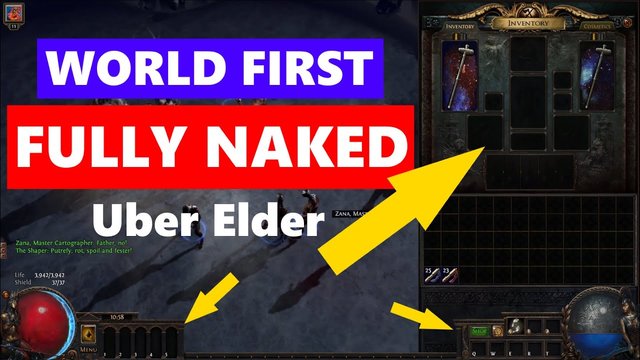 No gear other than weapon used.
No flasks
No active skillbar

Weapon was actually a 5L as the 6th link was Haste to give me an extra 6% movespeed.. (yes, I prioritised that 6% movespeed over 50% MORE damage because movespeed is important when we are NAKED!)

Regarding the dislikes: People seem to think that playing a summoner somehow invalidates this fight, even though it's a legitimate class and playstyle in the game.

I have to point out that it is ONLY with summoners can we actually achieve this kill. For any other skill I would have to actually press a button on the skill bar.

The purpose of this was to showcase not only doing it fully naked, but also as a further challenge, to do it playing one-handed and without pressing any buttons other than to move. No other class in the game would be able to achieve this feat.

I literally did have a beer in one hand as I did this kill.